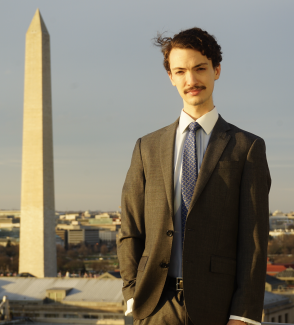 Matt Landini comes to Bluelight as a veteran of the D.C. political scene. Most recently, Matt managed digital communications for Del. Eleanor Holmes Norton (D-DC) during her primary challenge. At Bluelight, Matt is eager to help clients shape and perfect their online presence. During the 2018 midterm elections, Matt designed and implemented a print advertising campaign for the Jewish Democratic Council of America (JDCA), which resulted in targeted placements in nearly 30 newspapers across the country – to great success. In total, JDCA endorsed 58 U.S. Senate, House of Representatives, and gubernatorial candidates. More than 80% of those candidates won their races, helping flip 28 seats from red to blue.

Previously, Matt interned in the Obama administration for Secretary of Commerce Penny Pritzker. At Commerce, he honed his interest in emerging digital spaces and digital administration. Matt also interned for Cleveland’s NPR affiliate, WCPN, where he covered state politics with the news team.

Matt received his bachelor’s degree in political science from Davidson College in 2017, where he was editor-in-chief of the school paper, the Davidsonian. He is an alumnus of University School in Hunting Valley, Ohio.